After some 20 years in the recruitment sector, TEAM Managing Director Liz Longman is retiring at the end of 2016. Having started as a trainee manager of a High Street agency, Liz quickly progressed through the ranks and ended as a very successful Regional Director, responsible for a number of branch locations. She was then offered the opportunity in 2006 to head up the fast growing TEAM network and has never regretted a moment! “I have enjoyed every moment of my role within TEAM. To be part of, and lead, such a vibrant network is very fulfilling. Although I am sad to be stepping down from being the Managing Director I know the role will be in safe hands with Jackie Bennett.”

Jackie Bennett, also no stranger to recruitment as she originally worked for the same High Street agency as Liz, joined TEAM in April of this year as Liz’s deputy. In the intervening 6 months she has had plenty of opportunity to both shadow Liz’s role and to meet many of the 650 Member locations across the UK. “Whilst I was aware of TEAM and thought I knew what I was letting myself in for, the reality has been so much more”, commented Jackie. “The way the network operates and more importantly the type of people who are part of it, make it a real joy to be part of something that really does make a difference to so many people. I still have a lot of Members to meet and no doubt still a lot to learn, but I look forward to continuing to add to the great things that Liz and her team have achieved in recent years”

Jackie takes up the role as MD from 1st October 2016 and Liz will continue to assist until the end of the year. It is hoped that Liz thereafter will continue her involvement with TEAM acting as a consultant on special projects from time to time, not least assisting with TEAM’s annual networking conference. 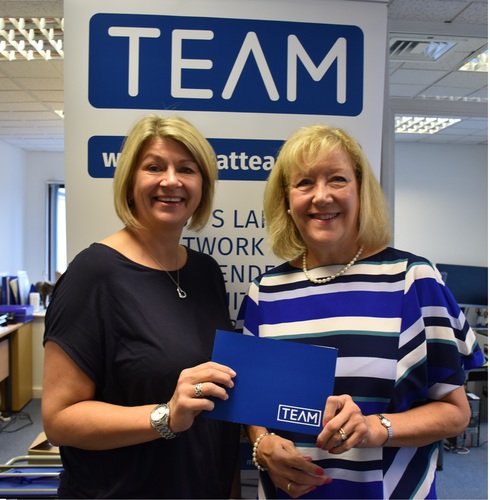