Jobwise Wins 'Employer of the Year' in E3 Business Awards 2016

North West based Recruitment agency and TEAM Member, Jobwise has been named “Employer of the Year” at the 2016 E3 Business Awards, which were held on 3rd June at the Macron Stadium in Bolton.

The recruitment company, which has been assisting local businesses and job seekers for over 37 years, saw off intense competition from nominees across the North West. The award was presented by Lisa Edge representing the award partner Preston’s College. 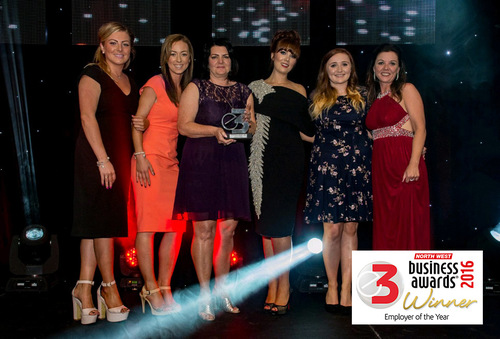 Receiving the award, the company’s Operations Director, Susan Tracey, said: “We are delighted to be presented with this award! This demonstrates the priority we take in investing in our staff. At Jobwise our people are our biggest asset and our strapline ‘love your job’ is key to everything we do.”

Speaking on behalf of 1 Events Media, which hosted and organised the awards, Managing Director Mubarak Chati said: “Jobwise, should be very proud of itself. In 2016, the E3 Business Awards attracted the highest number of entries - and probably the highest calibre of entries - that our judges had ever seen. Winning against such impressive competition really means something.

“As the host of the Awards, we were left in no doubt that the North West is home to some huge talent. Companies, social enterprises and individual entrepreneurs are doing great things for the region's economy, its people and its communities. Jobwise is a great example of that and I’m delighted that the Awards are helping it to achieve the recognition it deserves.”

More information about the E3 Business Awards, including a full list of winners, can be found at www.e3businessawards.co.uk.